In July 2016, a TechCrunch article stated that Uber had completed over 2 billion rides for passengers.

In this book, the third in the Uber Chronicles series by Jessie Newburn, the author takes you inside her car (and her mind) on 35 trips. There’s the young Uber passenger, who on an hour-long trip to both get his girlfriend and then bring her back to his home, shares his music collection with Jessie, tells the story of how he was kicked out of college for cannabis possession, and fancies himself the best passenger she has ever had.

There’s a brush with fame in picking up a contestant from The Voice and American Idol. There’s the first (and to date only) passenger to earn a three-star rating from her after requesting a ride while still on an Amtrak train 20+ minutes from arriving, treating Uber like a black car service and not even tipping a couple bucks for making her wait over 10 minutes before his train arrived.

There’s the young man from India, celebrating his America-versary, who shares the challenges of discriminatory wages and trying to support his family after his wife just had a baby a few months ago. There’s the 40s-something couple flirting on a second or third date, the guy just back in the U.S. after a decade abroad who doesn’t know that speed cameras have been installed all over the city, and even her stories as an Uber passenger.

Come along for the ride!

I see my rider standing outside the Harris Teeter grocery store. He’s dressed in athletic clothing, looking nonchalant as heck. He sees me approaching and casually waves his hand in acknowledgement.

His Uber manners and protocol are good. He states his first name. Pauses. Waits for me to acknowledge that he is, indeed, my passenger then gets in the back seat. I introduce myself.

He’s of Chinese ancestry, about 21 years old, wiry and not particularly tall. He’s not carrying any grocery bags, yet I picked him up outside a grocery store. That alone makes me curious. He tells me he was running at the nearby high school track and that he went to Harris Teeter afterwards because they have free sugar cookies. Free, regular free? I ask. Like “you can take them” free or “they hand them to you” free? They’re in a jar, he says. You can take them yourself.

He asks how long I’ve been using Uber (his words). I tell him about three months as a driver, longer as a passenger. He says he has been using Uber for a year and a half, since they started. I tell him Uber has been around longer than that. Quite a bit longer. Seven years longer. Oh, he didn’t know.

I’m taking him home. His family’s home is in a pretty and rural part of my home zone of Howard County, Maryland. The houses are bigger and the land plots bigger still than those a handful of miles closer where I live. These more-expensive homes sit on some of the richest and most fertile agricultural land east of the Mississippi. The neighborhood is quiet, peaceful, green. The day is gray, misty, cool.

He’s a college student, studying philosophy at an out-of-state university. He took an Uber to the race track this evening, and now he’s taking one home. His parents aren’t able to drive him everywhere he wants to go, so he relies on Uber a lot. I drive past his house by a smidge. He’s not bothered. You can let me out here, he says. Then I watch him sprint home.

Key experience: As I drive down the idyllic roads leading to his home, I wonder about the expenditure for a run: $4.84 one way. Multiply that by two. For the life of me, I can’t imagine ever saying to my parents (as a teen or young adult) that I need to go to the track, and I need to hail a taxi. I’m pretty sure I’d be told to run around the neighborhood, instead!

My next passenger is at a Royal Farms convenience store off of Route 1. She’s Ethiopian, a little short, a little bit overweight, and she looks to be in her early 30s. After we leave the parking lot, we have to circle back to the store because she forgot her phone’s power cord there. She has been working at this store for close to four years.

She has lived in the area and in the country for eight years but doesn’t like it as much now as when she moved here. Why? I ask. The neighborhood isn’t as nice and quiet as it was before, she tells me.

I ask if she has plans for Mother’s Day, which is in a few days, and she says, no, she’s not a mother. And she’s not getting any presents. That makes her laugh, and I laugh along with her.

I ask if she takes Uber home from work often and she says no, it’s too expensive. She usually gets a ride from a friend.

I tell her which stores in the area offer better selections and better pricing. How different stores have different approaches and systems for how they organize their items and how those different systems–such as sorting all similar items such as skirts by color rather than by size–can appeal to some people more than others. I tell her there is an A#1 most important rule for shopping at thrift stores and it’s this: Nothing is a good deal. Never buy anything because of the price at a thrift store. Never be swayed into thinking she should get something because the price is good. Thrift stores are filled with tens of thousands of discarded items and they provide, at least for me, a wonderful reminder only to get that which I love.

I drop her off at a little suburban house. Nothing fancy. Nothing shabby. Two cars are in the driveway. Her ride home from her job at Royal Farms costs her $14.67.

Key experience: I don’t know her future, and I don’t hold a crystal ball. But I have a lot more respect for the people who work the gas stations and convenience store checkout jobs, especially the many immigrants. I don’t imagine her life here in this country has been particularly easy.

She says she missed the school bus, then she tried to go to school this morning but the traffic was so bad she couldn’t get there. I consider saying that there is a difference between “couldn’t” and “didn’t try,” but I leave it. She’s 16. She’ll learn about the integrity of her words in time. For all I know, maybe it was her parents who didn’t feel like dealing with the traffic.

I notice my own mind is whirling with comparisons of the world in which I grew up, e.g. it’s Tuesday, there is school today, regardless of how I feel, I have to be at school on time, for the whole day. That’s what my parents told me. That’s what I did. Rinse and repeat by how many days of school there are in a year minus an occasional–and I do mean occasional–sick day.

It would have to be an extreme circumstance for either of my parents to drive me to school if I missed the bus or, even more fantastically, put me in a $12.07 cab ride to get to school. No, I’d be walking. But it is a different world, and the cultural attitudes around forgiving, protecting and supporting children are different now. I drop her off at 11 a.m. on the nose in front of her school.

Key experience: I am who I am, in part, because in my earlier years I had to get up every single school day and get to school; in the summer, to swim team practice; and after school in the spring and fall, to soccer practice. And she will be who she is because of a significantly stronger sense of adult care and protection. Neither is better. It just is what it is.

My next passenger looks to be in his early 30s. White, medium height and medium build. Blond. He’s wearing a Washington Nationals baseball cap. I’m taking him to a friend’s home in Chevy Chase, a very nice neighborhood right outside of D.C.

I notice the car in front of me is going very slowly, and I ask him if there is a speed trap nearby. He says he doesn’t know, that he’s not from the area but that his strategy with speed traps is to use the other cars as his bait with the police. What does he mean by that? I ask. He yells at the drivers, gets them to go fast and then he drives just below their speed. His solution? Only one of them is going to get caught in a speed trap, and it’s not going to be him.

I tell him that I believe there are speed cameras here and that anyone and everyone going over the speed limit gets a ticket. A nasty, hefty ticket.

He’s incredulous. Everyone gets a ticket!? (What madness is this? his voice seems to convey.) I ask a few questions and discover he has been without a car for a decade, he was a Peace Corps volunteer in Peru and he lived in Asia for about five years after that. He’s back now for a job he, per his story, couldn’t refuse. We talk a bit about that. It’s a new field of management and business practices that uses neuroscience as its research base. It sounds interesting, and I get a follow-up link from him to read up on the subject later.

Key experience: His years abroad have de-Americanized him just a bit. When he thanks me for the ride, he says it in a way that sounds and feels incredibly genuine. Not that Americans can’t be thankful; rather that his sincerity level seemed to come from a different wellspring inside him.

I complete the ride, rate him, turn off Uber and turn on Lyft, and decide to drive slowly down quiet streets in this beautiful neighborhood. I’m closer to D.C., and the Lyft app is all pink with surge pricing in D.C. I’m certain I’ll get a ride. Nine minutes later I do.

“Part people watching, part sociology, all entertainment. I love how these snapshot stories develop multifaceted, and somehow magical, images of life in today’s urban America. And as Jessie’s passengers and their stories pass one by one almost in slo mo before our eyes, another overarching story also unfolds slowly, like pearls stringed into a necklace, and that is basically Jessie’s life. Highly recommend this book, perfect companion for cozy armchair reading, but also for airplane rides and metro commutes.”

“A brief and fascinating read from the perspective of an Uber driver. Wonderful insights into riders as people. Fun and thought provoking at the same time.” 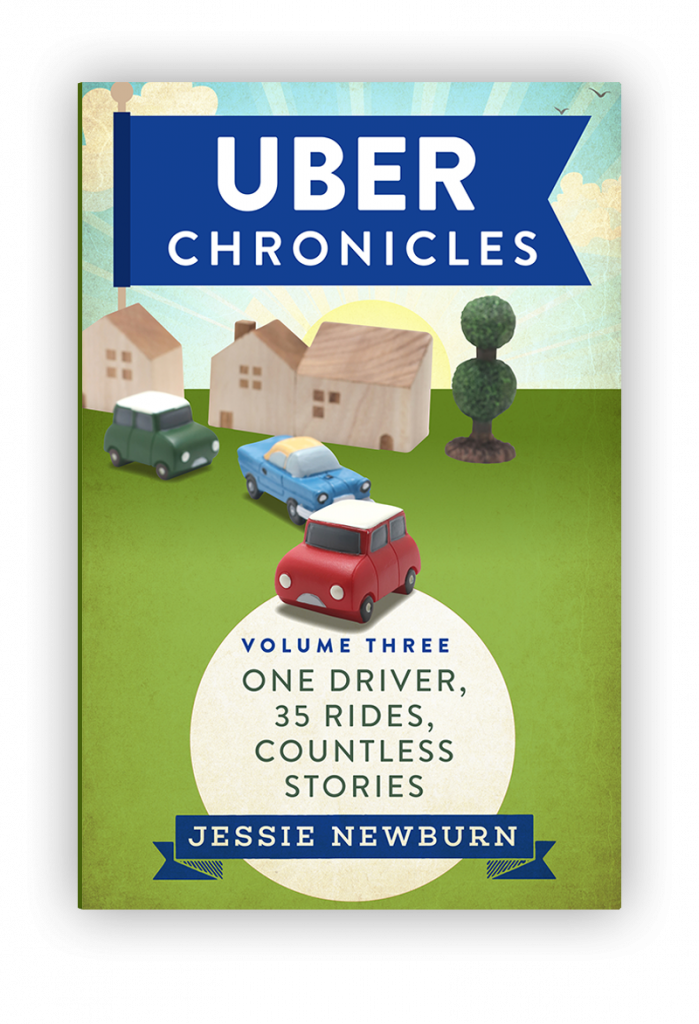