Normal people on normal errands in their normal lives.

In this, her fourth book of portraying her experiences and stories of her Uber passengers, Jessie offers a tender and oft-trenchant perspective on what it’s like to drive for Uber, Lyft and other ride-sharing services.

Often asked what are some of the wilder or crazier passenger stories she can share, Jessie declines the specific question, answering what’s true instead: Driving for Uber is mostly about taking normal people on normal errands in their normal lives … and in many ways it’s the mundaneness and everyday-ness of the experiences that makes the stories so tender and real.

So, if you’re seeking particularly thrilling or wild stories, this isn’t the book for you. Though if you’d truly like an insider’s view of driving for ride-sharing services (in America and the DC Metro area), then this book is perfect.

My next passenger is six minutes away. I find myself at a community college; it’s a nice-looking campus. As I approach my passenger, he thoughtfully waves his hand to identify himself to me. I appreciate this tremendously. He gets in the front seat.

He’s in his early 20s, Latino, thin and medium height. He is studying international business law and will soon move on to a four-year school where he can continue with his studies. He will add on a degree in cyber security for a double major.

After telling me about himself, he says, What about you? So I give him the short version of my life on the career and professional side of my story. He tells me he is a casual user of Uber, having taken maybe 20 rides, all told.

He asks why I do Uber, and I tell him how I had visions of getting mad surge-pricing fares after the blizzard this past winter when 26 inches of snow fell in a few days. He tells me he is from Venezuela, how he had never seen snow before the blizzard, how excited he was to stock up on food with the impending storm coming, how fascinated he was to be stuck inside for a few days and how fun it was to open his front door and stick a can of soda outside in the snow to chill it. Sometimes it’s the little things in life, eh?

Key experience: The world is new to him; it’s lovely to see things through his eyes, if even for a moment.

Next up, I’m headed to Petit Louis Bistro, an upscale restaurant in an upscale part of northern Baltimore City.

Here, the streets are all recently paved and marked with brand-spanking-new reflective paint including the prettiest and most clearly marked bike lanes mine eyes have ever seen. These fresh, maintained and attractive streets and signage are in stark contrast to many of the streets of Baltimore’s inner city. As I drive around, it’s clear from the homes to the restaurants to the fancy streets that this is clearly a wealthier Baltimore neighborhood.

My passengers get in: a fairly nice looking white couple in their mid 40s, or so. They’ve been out for a nice dinner at a fancy restaurant, and they’ve been drinking.

The guy tells me I left a drink in the back seat and hands me a bottle of peach-nectarine Ice® drink. It’s unopened. I take it as a tip from my white-girl cheerleader passenger who asked that I detour off the journey so she could pee, urgently. I open the bottle and drink it, not because I’m particularly thirsty but more because it’s mine now, and I feel a territorial sense and righteousness around the saying, possession is nine-tenths of the law.

The alcohol they’ve been drinking manifests on the woman more strongly than it does on the man. She’s a little too loud, a little too funny and a little too everything. They’re clearly early in their courtship ritual, and she appears to be sharing her pedigree in the form of various stories from her childhood and younger years, all to help him understand who she is and from whence she hails.

He does the same, though not as aggressively or deliberately. They are giving each other information about their families, their lives, their values, their personalities. She seems to want him to know that she is a good catch, yet down to earth. Or maybe I’m projecting. I don’t know. She attempts to balance her credentialing stories with frequent cuss words, tales of cannabis use and calling me dude, repeatedly. Perhaps I am just making up a story about her. Perhaps I’m reading her spot on.

Their dynamic with me, their driver, I find peculiar. They started the ride out by engaging with me in a rather jovial way, asking me questions, having a conversation with me, talking as though the three of us were all sitting around a dining room table together…which was fine, of course. But then they moved to a two-person conversation without changing the volume at which they spoke. Interesting. Actually, a bit odd.

Usually when a couple talks in my car (be they lovers or friends), they speak to each other in somewhat hushed tones—or at least at a volume that is meant to be heard by the two of them, first and foremost, but not loud enough for me to feel invited in. People naturally lean forward from the backseat or ramp up the volume of their speech when they want to speak to me or ask me a question, but this couple, bizarrely, keeps the volume of their conversation at a public-announcement level for the entire ride despite the fact that they’ve clearly moved to intimate talk meant for the two of them. It’s a little weird, kind of like being forced into their relationships and courtship.

It’s near midnight, and they are headed to Fells Point, an historic waterfront area and bar scene in Baltimore that attracts an older and definitely more diverse crowd than Federal Hill does. I drop them off, and they walk to the Cat’s Eye Pub, a great live-music bar where I have gone dancing now and again. (More again, than now, but still …I’ve been there a few times and I like the place.) I drop them off and wish them a good night.

Key experience: This couple appears to be more in my realm for socioeconomic, peer cohort and cultural alignment than most of my passengers are, so I tune into their courtship with keener interest. While I find younger people (the majority of my passengers) interesting—as I find most people interesting—I believe it’s human nature to tune into one’s peers for a social barometer more than it is to look up or down the age ladder for such clues about behavior, dress, actions and attitude. I’m grateful, in my own way, for the lens to observe their courting and remind myself not to try too hard when out on a date. A guy’s either gonna like me or not. The more authentic I am, the faster we can both make a decision about whether relationship potential is afoot.

My next ride is two minutes away, per GPS. Uber’s directions want to take me all the way around the block to get to them. I see on the map that they are a half block away, straight ahead. I ignore the directions and drive to them. The gal climbs in. The guy slides in. I wonder if I’m going to need the vomit bag I have at the ready in the back seat.

They’re both white, late 20s, headed home after a night at a bar. I ask if they’re okay. I’m good, she says, he was doing shots all night, she says, as she rolls her eyes and laughs.

She asks how I like Uber, tells me she has been thinking of doing it, and wants to know what I like about it. I press her to first tell me why she wants to drive for Uber and what her concerns are so I can better answer her questions.

She tells me they want to buy a house, but she needs a second income to do so. She’s a pharmacy technician now and wonders if one day a robot will be doing her job instead of her. We talk about multiple streams of income, not putting all of your eggs in one basket, and the ups and downs of driving for Uber.

I take them to a small home in an older and poorer neighborhood outside the city.

Key experience: It’s an enjoyable conversation. Not a deep conversation, per se, but her curiosity and true interest in being an Uber driver made our engagement a little more than small talk.

“Really enjoying reading this book! I have always loved short stories and books/films that are interesting “slice of life” types. Love the author’s descriptions and how she thinks. Super fun, easy read that you can pick up and read one or two “rides” or spend a whole evening riding along.”

“Another great read from Ms. Newburn. If you hunger for people watching, like I do, these stories of random Uber riders will satisfy your appetite. I like her easy style. I feel like I know her a little more after each book in the series. I think she gets to know herself a little better which makes it an ensign more intimate “people watch.” 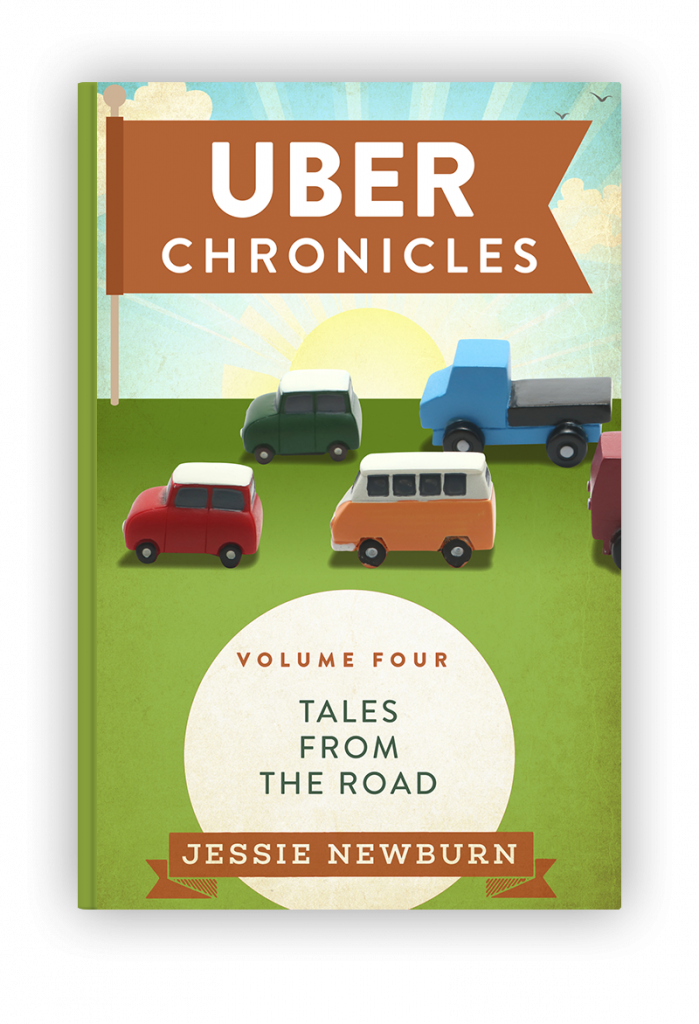