Uber Chronicles:
Stories from the Driver's Side (Vol 5)

The last (at least for now) of Jessie’s Uber Chronicles and your driver’s seat view of life as an Uber driver.

While some Uber driver writers tell stories of wild and wacky passengers, Jessie takes the approach that Life’s colors shine more brightly through the realm of the mundane, and she chose, instead, to write about every single passenger.

Come along for the ride with this, the latest and last, book in the Uber Chronicles series.

I drive a few minutes and am directed by GPS onto a quiet road with dozens of police cars parked alongside it. What? Oh, I’m near a police station or some sort of police headquarters office. The Uber app tells me I’ve arrived at my passenger’s pickup location. I wait. Maybe I’m at the wrong place. I back up. I don’t see anyone. I drive forward. I don’t see anyone. I back up some more, almost the full length of this desolate block. Nothing. Then I realize that I’m on the wrong street by a half block. There aren’t many half blocks in D.C., though I seem to have discovered one of them.

Right at the moment I realize I’m a half block from my destination, my passenger calls and tells me where to find him. He’s at a nice hotel around the corner. I drive to him.

Three beautiful and extremely well-dressed women are standing by him.

I was kind of hoping for a single passenger, maybe a couple at the most. I have a bunch of papers and books in my car on the floor of the front seat passenger side, and I realize I’m really not organized enough with my stuff, at this point, to take on a larger crowd. Also, my car is a bit dirty. Ugh. Well, my windows certainly are, and the outside hasn’t been washed in more than a week. The interior is fairly clean. Kinda. I hope they don’t mind. Before I picked them up, I spritzed the car with some Young Living Thieves essential oil, a mix of cloves, cinnamon, citrus, rosemary and more. It’s an instant air refresher.

Three very svelte, very pretty, very well-coiffed, superbly made-up women, incredibly elegant women get in my car. They’re all probably in their early 30s, they’re all Nigerian and they’re all pissed—very pissed off, the one in the front seat more than the others. They do like the smell in my car, they tell me.

The guy who called me and booked the ride comes up to the car and tells me to follow the Uber car in front of me. Okay, I say. Then the car takes off without waiting for us. Okay. Well, no worries. I have their destination address entered in my app.

My passengers are loud, animated, talking over each other and very unhappy with how they were treated by some of the men in the car we’re following. Their displeasure, at first, is expressed as an onslaught of complaints about—and outrage toward—the men and their behavior. One woman is calmer, and she redirects the conversation to their personal power as women and how she simply won’t tolerate this kind of behavior or provide a platform for this type of conversation from men.

The three of them are from New York City and are in town (D.C.) for a wedding. Alas, they missed the wedding. Why? I ask. Because they were late, one of them tells me. Now, we’ll probably miss the party, too, she adds. It’s 12:15 p.m. when I picked them up.

I’m driving them to a bar that leans African (not African-American, that is) in its patronage. The bar is, tonight and now, a 28-minute drive from their hotel and in a much less-swanky area. The conversation in the car ranges from anger at the men, to how men should treat ladies, to not allowing men to treat them this way and, well, not much else.

It’s a little chilly outside and they’re not dressed very warmly. I ask if they need the heat up or down, and they tell me I’m nice and that the Uber drivers in New York have no manners and someone should report them. I tell them they will undoubtedly be the prettiest ladies at the party they are attending, and they thank me.

We’re now clearly in the bar area and where I’ll be dropping them off soon. The Uber app directs me down a small street and then down an alley. An alley! Like with trashcans and stuff. We call the guy who booked the Uber ride and he gives us an address and a venue name. Odd, I am half a block off from the address and at the back entrance of the place. Whatever. Sometimes the Uber GPS function in the app takes me (and other drivers) to the backs of buildings.

I navigate to the front of the bar, drop them off and wish them a good night. Indeed, and without question, they are the most exquisitely dressed women among the few dozen people milling about outside on this lovely fall evening.

Key experience: While the decibel level of their complaints was a bit hard to take, and their cultural expression and accent was overwhelming to me at times, I very much appreciated the sentiment and most importantly the message I took from their conversation, which was not to “give platform” to behavior from men that is disrespectful to me as a woman. There was an elegance about one of the women in particular that transcended her dress, make-up and hair, and it came out in her voice and words: she wouldn’t put up with being disrespected because she owned and was responsible for her own value. She had an air of royalty about her. It was quite something to witness.

I continue on toward my home. Beep! A call comes in. Just a few minutes away. I take it.

I start the ride. I feel no desire to go out of my way to figure out which house is his. I wait. I start to wonder what’s up and why he isn’t outside. Uber then informs me he has canceled the ride. Three dollars and 45 cents for me. Whatever, dude.

Key experience: Obviously I can’t know the mind of someone else, especially someone I’ve never met, but I don’t get why people call Ubers and then cancel minutes later. What massive change happened in someone’s life in five minutes that moved them from needing a ride to not needing a ride? Boggles me. At least drivers get paid for cancellations when we’ve either driven a certain distance toward a passenger or are within a certain distance from the passenger’s pickup location.

I start driving back toward my home, which is only a few minutes away. A request comes in. Seven minutes away. My pickup is at the local and nearby mall. I take it.

Mall and retail pickups are often confusing to us Uber drivers because many times all we see is the address of the shopping center. The whole, entire massive shopping center. We don’t always see the store name where someone is waiting for a pickup. So when my passenger texts me to tell me the specific store where he needs to be picked up, I respond with K, and I feel gratitude for his thoughtfulness and consideration.

I pull up; he’s standing outside; he gets in. He’s the only person standing in front of this particular store at 10:20 p.m., more than an hour after the mall has closed. I laugh and say, I’m pretty sure you’re my Uber passenger, but I still need to ask you your name. He speaks and tells me his name, and I feel an unexpected surge of attraction to him.

He’s Black, maybe mid-40s, maybe older, maybe younger. He’s of medium height and build and he’s wearing a rather dorky knit cap on his head. He has a box of food, and I say it smells good; is it Chinese food? He tells me, no, it’s baked goods, from Dunkin Donuts. And I’m perplexed. I sniff the air some more and tell him, Wow, I sure got that one wrong.

We talk about all the construction around the mall and the downtown Columbia, Maryland, area, about the new retail and residential buildings going up, about the community and recent changes. He lives in Columbia, my hometown, too, and I’m taking him home tonight. I don’t know if he’s gay, straight, married, single. I just know that I love his voice: the richness, the depth, the masculinity, the humanity, the intelligence, the kindness.

I feel teary and emotional when I drop him off as I want to stay in his presence and drink him in through my ears. My response to his voice is not logically explainable. It feels—if such things are true—almost past-life-ish, or some sort of soul connection. The sound of his voice penetrates my heart and touches me deeply in a way that surprises me.

He thanks me for the ride and the conversation and tells me he hopes I won’t be out too late tonight. I laugh and tell him one of the nice things about the Uber gig is I can go home whenever I want.

I’m also perplexed that just a couple short rides earlier another passenger’s voice and manner of speaking had me so riled up and angry because of his lack of using his voice for his own power and advancement. And here I am now, a messy pile of emotions after hearing this passenger’s melodious, rich, powerful voice.

Key experience: As my passenger leaves, I’m reminded of a quote from a book I started reading a few days ago. The book is Shantaram by Gregory David Roberts, and the quote is “The voice, Afghan matchmakers say, is more than half of love.”

“Very entertaining and well written! I never imagined how interesting it could be driving for Uber. Of course, it’s all in the driver and Jessie is clearly in the driver’s seat. This book gives us a tiny glimpse into the lives of her passengers as well as her own.” – Matt P.

“An interesting take on Uber driving. Written from an open, objective, observational standpoint. She’s like the Margaret Mead of the digital age. Little tidbits and takes that add up to a glimpse at the human experience.” – Elizabeth B.

“I wasn’t sure what to expect with this book since I have met Jessie Newburn a couple of times. I loved it! I started out just to read a few pages but after one chapter, I didn’t want to put it down and read it straight through. It’s not long, so it wasn’t hard to do. But her writing style made it all that much easier. As a people watcher, this gave me a great view right from my home.” – Amy B. 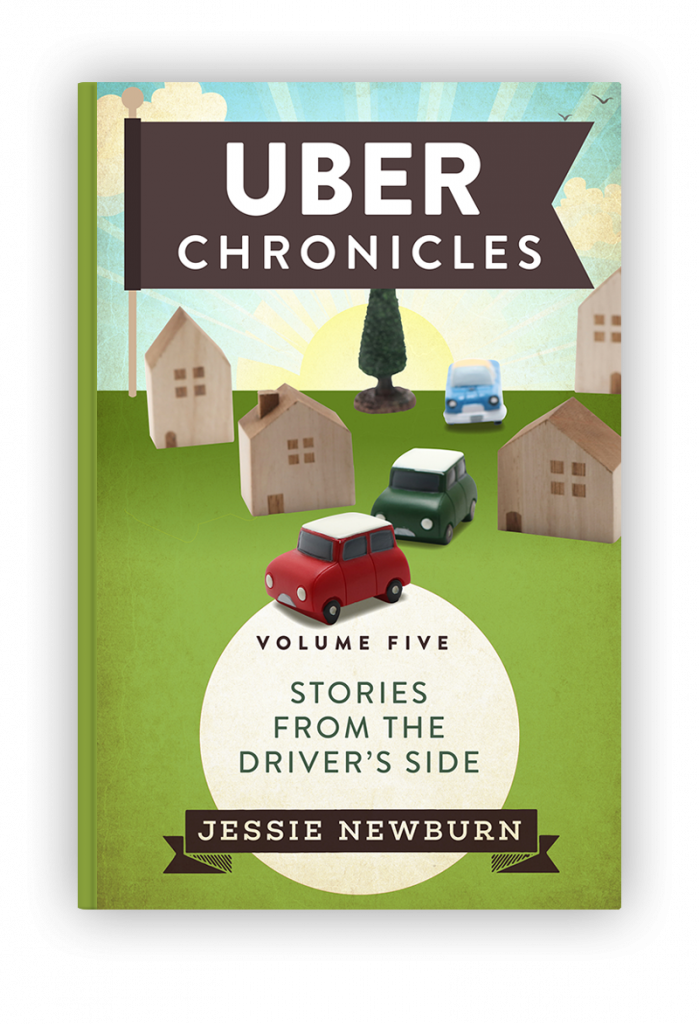