This made me cry.

My heart swelled with the kindness offered Dutch shoppers, particularly, though by no means exclusively, to elderly people who want to chat, have a bit of a conversation and not be so rushed through the lanes when checking out at the grocery store. Quite the opposite of what Taco Bell is doing with their technology-interfacing, four-up, drive-thru-lanes.

Started as an experiment in 2019 by Dutch grocery chain Jumbo and as part of the Dutch government’s One Against Loneliness campaign, the store got such enthusiastic response that they added the “slow lane” checkout options to 200 more of their 700 or so stores.

The same grocery store also added several chat corners, the All Together Coffee Corners, where any customer can sit and have a chat with others there. People from the nearby community volunteer to sit and be available for conversations.

I find these actions and this willingness to extend a welcome to, particularly, elderly people, quite heart-warming. 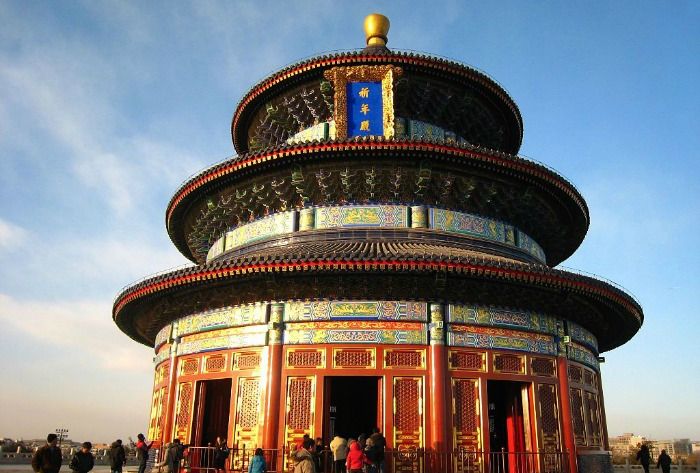 a playground for aunties and uncles

Years ago I traveled on a rather-state-subsidized trip to China on one of those chamber of commerce-organized trips. (If there was ever a country to be on a bus wearing a name tag at all times, with a planned agenda and a tour guide, China was a good a country as any one one to do it in.)

One of our planned visits was to this rather large park, the Temple of Heaven, built in the 1400s. (FWIW, the scale of everything in Beijing was on a rather-large scale, though this particular space was particularly vast.)

Ancient architecture. Built for a time long passed. Massive temple columns made of tree trunks from a time before all old-growth forests had been decimated. A park yonder with trees and shrubs and flowers and grass and lots of cement for lots of feet to traverse. 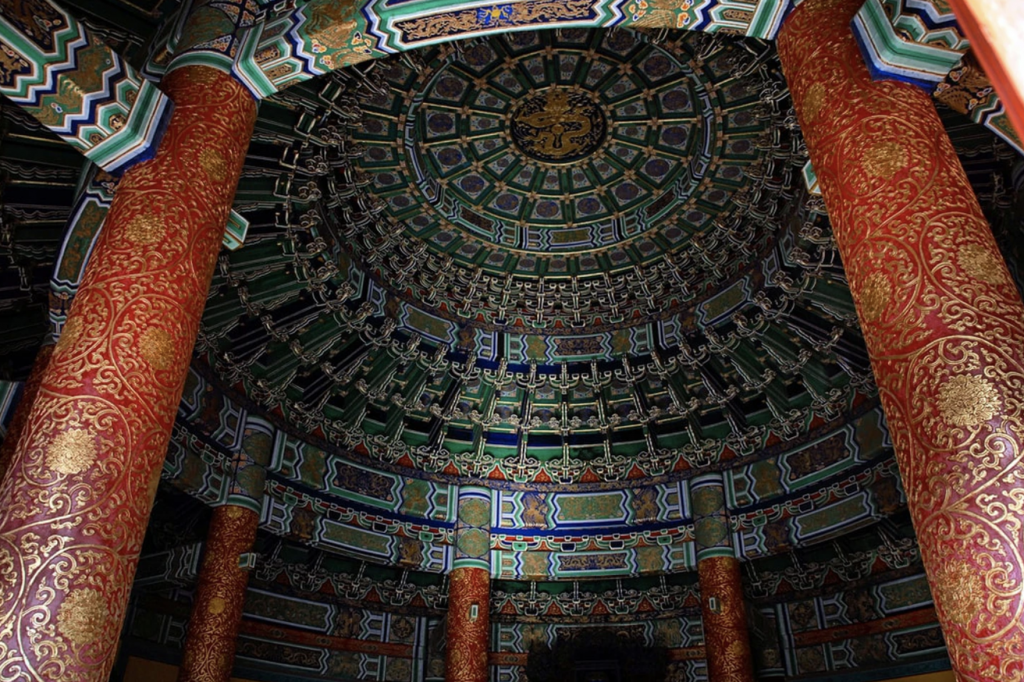 they were dancing and singing and moving to the groovin

But what was MIND BLOWING — as in one of the most memorable parts of a trip to a land as exotic (to me, then) as China — was how many old people were in the park. And not just hanging and doing nothing, though that, of course, is an acceptable option for anyone anywhere any day. 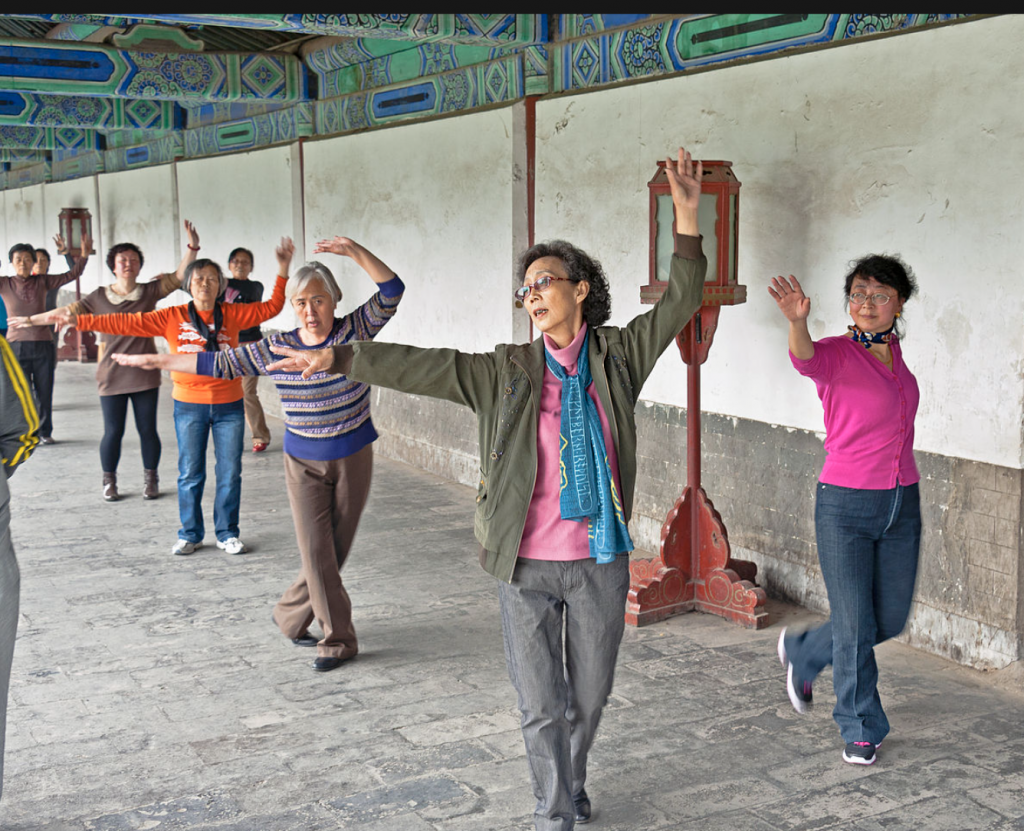 Some were doing Chinese exercises such as Qi Gong. Others were doing disco-y dance moves in a group with an instructor. Others were singing with their song books out. Others were playing instruments with a conductor leading them along. Some played cards, or majong or whatever. Some had fans and silk scarves, and they did their choreographed, or sequenced, dance moves, each equally spaced apart in row after row. And on and on.

There was so much laughter, so much doing, so much welcoming. Any one could join any activity at any time. There were no fees, nor any tickets to purchase. Showing up was the entrance fee and participating was the ticket. And almost everyone participating was older. Some were mid-life-looking, though many looked to be more in their 60s, 70s and 80s.

They were welcome. They had peers. They had connection and community. They had activities and interests. They could make friends, check in on each other, be seen. Not be alone. 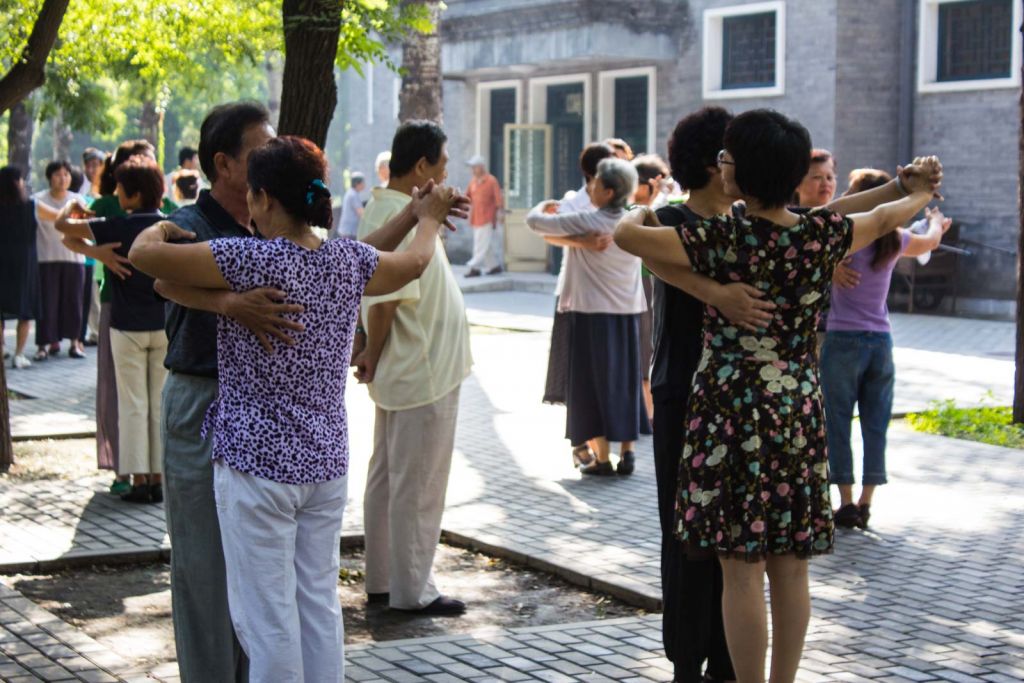 It’s not easy for everyone to make friends. And friends change. People move, they die. People’s mobility and out-and-about-ness often declines as they get older. I believe these sorts of welcoming activities for elderly people are important. Very, very important.

My mother (currently 82) found (as in joined) The Village in Howard, a group of elderly people who do things together and help each other out. You don’t need an invite; you just need to know the schedule. Everyone is welcome. Within that group she has found friends with whom she now has regular and scheduled weekly zoom calls, walking buddies with whom she can get in some sunshine and exercise walking around the lakes in Columbia, and peers her age.

This kind of connection and community is priceless for her, and she expresses her gratitude for finding the group often.

My mother is active, a do-er, independent beyond all measure. She’s probably one of the last people to worry about keeping connected and out and about. And yet I find great comfort that she has found peers, connection, easy activity and community with her “Village people.”

I wonder if the slow lanes would fly in the U.S.? If any grocery stores would take such an initiative on? If other customers in their rush-rush-rush to get in and out of a store would understand it? 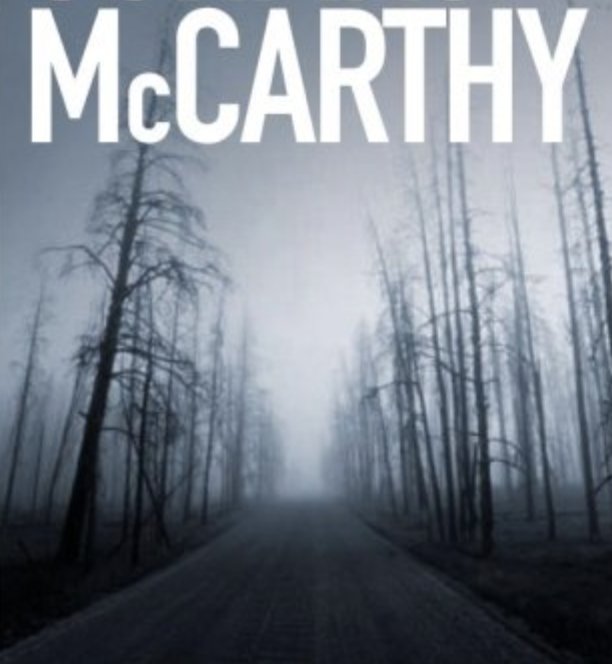 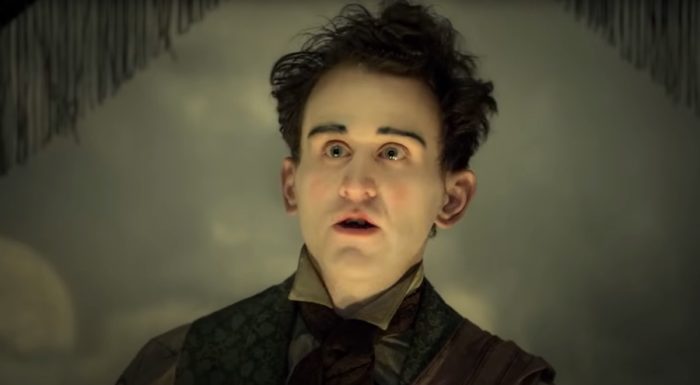